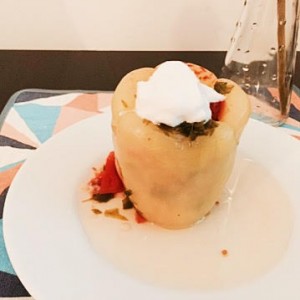 A few years ago I used to have a neighbour who, during summer, would start cooking at 6 am to avoid the daytime heat. Since we would sleep with all the doors and windows open, hoping for the faintest breeze, we would wake up smelling her meat stew and her baked aubergines. What a horrible way to wake up at that hour, especially when the fridge was empty.

Summer is not to be spent in the kitchen if you don’t have AC, but when you miss a delicious season dish, it’s worth the sacrifice. And if you can’t stand the heat you can always set the alarm before sunrise for an extrem experience. Just make sure your hangry neighbours don’t line up at your door.

I’ve been thinking for a while about this vegetarian stuffed peppers dish and I adapted it a bit. Instead of the white rice people usually add to the meatless peppers I added buckwheat because it has better carbs. The result is a lighter, lower carb, healthier and at least as delicious version of a traditional recipe.

Cooking time: 40 minutes at max
Difficulty: beginner
Servings: 3-6 (or even one if you can eat all of them at once)

It’s not rocket science: first you have to cut the onion, the carrot and the mushrooms and stir them in a wok or pan for no more than two minutes. You can add a spoon of olive oil, although it’s not necessary, since the mushrooms are really juicy. After stiring them you add the buckwheat, the egg, the dill and the parceley, the other spices, a spoon of tomato paste and you mix everything well.

The secret to this recipe is using lots of good spices. The buckwheat doesn’t have a strong flavour, the champignons have a very light one as well, so go ahead and use salt, pepper, oregano, basilic, thyme and whatever there’s in the pantry.

Then, stuff the peppers and put them in the cooking pot. Don’t stuff them all the way up, though, because the next step is making small caps for them from thin tomato slices that need to fit inside. Add water to the height of the peppers and let them boil. After 20 minutes add another spoon of tomato paste and a chopped tomato, let them boil for 5 more minutes and it’s done!

When they’re ready, teleport them to the plates, add a spoon of greek yoghurt and pray for them to cool down 🙂

Have you tried this recipe? How did it go? If you have any tips, I’d be happy to consider them next time I prepare it.