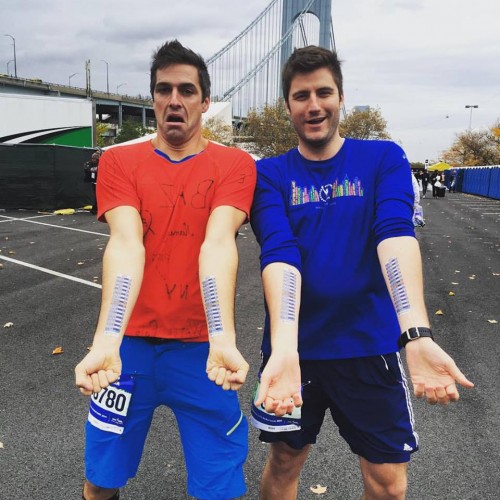 The following report is written by Antonin Bonnet. He’s french, but he’s been living in New York for five years now. Back in our lesser active days we shared a flat for a while in Bucharest. I asked him to share some details about his experience in case any of you are interested in running the famous NYC Marathon, the biggest in the world, with 50.000 runners at this year’s event.

Although it was his first marathon, Antonin finished it with an awesome time. Looking back, he admits he made some mistakes prior to the race, just like all of us do.

Ok here is a little report about my marathon. Sorry, but this is honest, not the perfect runner’s story!

Just to clarify, I’m not a historical runner 🙂 I have been a resident of New York since October 2010 and I started running in September 2013, then became a member of the NYRR (New-York road runners) a month later. Through that membership you automatically qualify every year for the NY Marathon.

When I say “automatically” it’s a shortcut; because you still have to run 9 qualifying races and volunteer for one to get your admission but the overall cost is way under the 2,500 dollars you have to raise (team for kids is the cheapest) or the international packages (sold by operators to foreigners). Another advantage for NY resident is that that membership keeps you trained, and keeps you disciplined to a certain measure.

Running a long distance was not my initial goal. I started running just to stay in shape since I also practice other sports, I joined the NYRR mostly because of my friends. Running was more a day to day thing, it’s easy: sunny weather – we go to Central Park, foggy, rainy or cold – you can still run at the gym. Also, there’s not much equipment needed, running shoes is all I need for a “reasonable distance”. But after 7 half marathons and one run under 1:30 I thought I was ready to go to the next level. This year’s marathon was my first one.

I’m sorry I can’t really talk about proper training since I made a lot of “conscientious” mistakes like drinking alcohol until the week-end prior to the race, when I was in UK for the Rugby World Cup semi finals. Try not to drink when you are surrounded by Irish, English, Australians.. impossible!! Then to gain some confidence I made another mistake: running 26 km 6 days before the race at Hyde Park – London. I only partially followed the proteins / carbs diet and all that combined brought some anxiety. I also started to lower down my expectation from 3:30 to 3:40 which was a wise move considering the context.

However on the race day, I was feeling very good, arrived early and decided to transfer from wave 1 to wave 4 to run with my pal Basile that got a BIB at the last minute through a friend. Basile is a sport teacher but got the BIB of a 70 years old French guy that twisted his ankle 10 days before the race. Even though his goal was 3:30 he could not join my wave; NY marathon rules you can start in later wave not an earlier one. Crazy, but I guess necessary to avoid the entire thing being a mess (we are talking about 50,000 runners).

The beginning of the race was fantastic, on the Verrazano bridge (Staten Island) we were alone since most of the wave 4 runners are among the slowest. We had the bridge and the first 5 kilometers for ourselves. Then it got a little crowded and we struggled to pass wave 3 and some runners of wave 2 especially the 5 kilometers before the Queensboro bridge; as a consequence I would not recommend changing waves if you want to do a time.

We did the half marathon in 1:45 as we planned and I thought I could keep going on the same pace. I was mistaken. The straight line on first avenue on the way to the Bronx literally killed me. I had to let my friend go forward and the lack of training made me struggle to stay on the 3:45 pace. In the last 2km I got some cramps and I ended up suffering during the best part of the race in Central Park (so many people are cheering and I look in pain).

8 groups of friends were disseminated along the race path and they were a great help. “I can’t give up otherwise they will see me walking” I thought for the last 2 kilometers and I have to be honest that’s what made me run 3:47 at the end. I’m quite happy since it’s my first one but I’ll train more next year 🙂