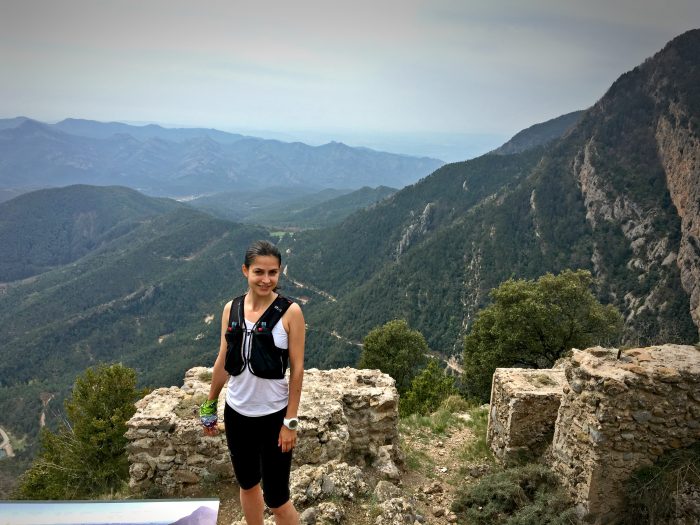 When you know your strengths, you know what sets you apart from the rest of the pack. But so does everyone else.
When you know your weak spots, when you’ve learnt to recognize them, you have your biggest growth opportunities right there.
Some of us, trail runners, do better in endurance events, others excel at speed races, while some love technical ground.
I’ve always known I’m not that good at climbing. Nor speed. (I blame it on cake) So whenever I insisted on these two aspects in my training I could tell the difference. For example, last year, by the end of the season, I could tell how much the few mountain trips and that once a week quality training had helped me.
Now, after the ankle incident, I’m left with a horrible fright of technical descents. I feel like my feet can slip any second and I might break something again. I don’t trust my legs anymore.
I noticed that during the race at Kullamannen and also last weekend, during a longer run in Corbera. I couldn’t believe that I was walking on some descents where a few moths ago I’d fly. I knew what I was doing wrong, yet I felt too scared to speed up.
It’s pretty frustrating when you think about it, especially since it was one of the (few) things I was pretty satisfied of myself in, and now, on every technical descent, I’m being overtaken by 50 runners a minute.
The bad news is that, almost over night, an aspect I thought I had pretty much mastered became a weakness.
The good news is, like I said earlier, that this means I have room for improvement.
I don’t see a better way of getting rid of my new fear besides the classical method of facing it. So my plan is to find a few technical descents around, with cobblestone, bigger and smaller rocks, maybe some slippery ones, and practice them as many times as I have to until I get faster and kill the fear.
Remember the legend of Demosthenes, the ancient speaker who practiced his speeches holding stones in his mouth in order to improve his speech?

What are your weak spots?

What could you do to improve?

Don’t be scared if you can name quite many. Seriously.
The other day someone was making fun of me: “so you don’t like verticals, you don’t like forest roads, asphalt, technical descents, nor too runnable trails. What is it you do like, after all?”.
It’s not that I don’t like them, it’s just that I know I have so much to grow in these areas. So much to improve.
And think about it this way. Compared to an elite runner or to a runner who has already reached his maximum level of speed, technique and endurance, you have so much more room to grow.
Think about what it would mean to improve every weak spot you notice by 5%. The incremental evolution would be fantastic. (Robert wrote something on this recently, it applies to everything, not just running).
So I challenge you to think about it and tell me what you’ll be working on next.
What are those things that you can practice until perfect. Those things that would make a massive difference in your performance.
And how do you plan to do it?