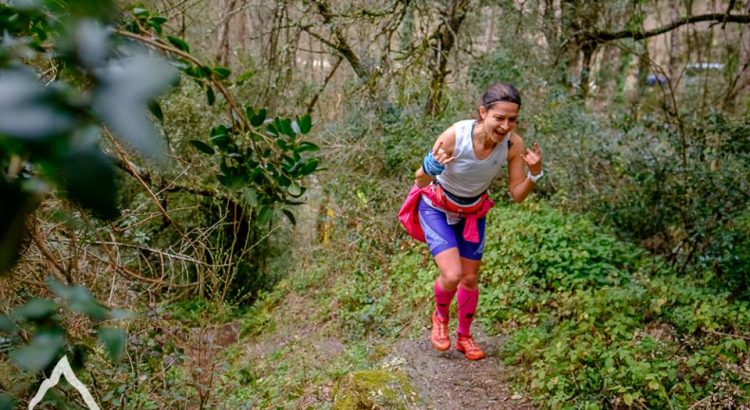 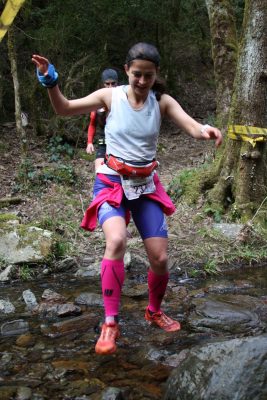 – I don’t usually care what’s in the race kit, but I like the Inverse t-shirt I found inside, I think I’m gonna wear it a lot.
– Also, not to mention that the marathon race has a very challenging profile and beautiful route.

I started with the front pack, but after the first kilometer I was already in the back, with the slower runners. I always start slow, especially if the race begins with a climb, and I noticed it takes me 9-10 km to warm up. Also, the very first climb is single trail so you kinda wait in line behind everyone, because there’s no way to pass by the other runners.
The route has three big climbs (km 6, km 20 and km 30), and a few shorter ones, but also very steep. I started by going relatively slowly, and although in the first kilometers I had the itch to start pushing more, I calmed down and remembered my initial plan. Plus, going too fast in the beginning could have meant not being able to do the last part of the race, the famous V shaped descent and ascent between km 34-36 (“la uve“, how they call it).
The route passes through the Congost river four times, and the first time was around kilometer 6. I got my shoes wet and then started climbing, meeting my photographer/runner friends ready to snap a shot 🙂
Compared to the two trainings we did there together, the race day was the best. Not only was the weather exactly how I like it – cloudy and not too hot, but it was also relatively dry. There were a few muddy parts, but nothing to slippery, as it had been in the previous weeks, when I was terrified of going downhill on the wet rocks.
Just to make a comment about how I like to run and how this race is like: I’m the type who avoids the stones and steps on the softer parts of the trail. But avoiding the stones in this case would have meant avoiding the race completely. It was FULL of stones and I felt that in my knees and my left plantar fascia on the downhills.
I was going slowly and thinking “these effing putas stones!! At least they’re not slippery“.
On some of the climbs I listened to music, to make the time go faster, but on the downhills, because I really wanted to be careful and had to focus on every little stone, I paused the playlist.
In this race I did everything a competitive runner never does:
– I stopped at every refreshment point to drink and eat (there were 11 points!)
– I talked to other runners. A lot.
– I met a running buddy at km 30 and practiced my Spanish for about 3km with him
– I smiled at every camera
– I trolled and made jokes with the people at the refreshment points. (At the first point, after just 5km, I asked them in a bad Spanish if there is still a lot to go).
Oh, and I had absolutely no race plan. Zero. The only plan was to finish in no less than 7h, a time that meant going slow enough. I finally finished in 6h 18 min and really didn’t try too hard.
I arrived at km 21 after exactly 3 hours. I didn’t know if it was good or not. I felt ok, not feeling tired, stomach fine, legs fine, I had taken one Powergel around km 7-8, and my only thought was that I’m feeling too good to be true and I would definitely going to hit a wall soon, I was just waiting for it to happen. So, I thought, let’s take it easy and save some energy for the final climbs.
And let me tell you the truth, the climbs were pretty vertical. No surprise that they all have names like “La Muerte”, “La subida del Infierno” etc. But having a big group of drummers on one of them, keeping the rythm and “pacing” us was really helpful.
On one of the last climbs a guy let me pass him by and congratulated me for my pace. That’s when I knew that even in that pace I wasn’t going to be the last one at the finish, doing better than I thought. I didn’t feel I was going that fast, I was still saving energy for the last “V” that I told you about, the so called leg killer and cramps builder.
However, there was no wall at all. No major pain, not even the scratches I usually get in trainings, except for the fascia that had had enough with the stones. I enjoyed the views and running at a moderate effort pace, setting my mind up for a 7 hour effort. I had some discomfort in the knees in the downhills, as I expected, but I didn’t have that feeling that I get sometimes, “is it over yet?”.
I got to the finish line smiling, pretty happy about my time considering the effort I had put in. But not necessarily for the result of this race, rather more for the good feeling it gave me regarding my first 50K. I realized that it’s doable, in an easy pace. Of course, the weather will be very different in Transylvania, the profile as well, but at least the distance doesn’t scare me that much.
All in all, I was the 6th woman overall and 4th in my category. I’m sure I can improve the time by a lot, but maybe next year. It’s one of the races I’d definitely run again, although it’s not exactly my type of profile. Or maybe that’s one of the reasons why I’d go back, this time for a real fight. 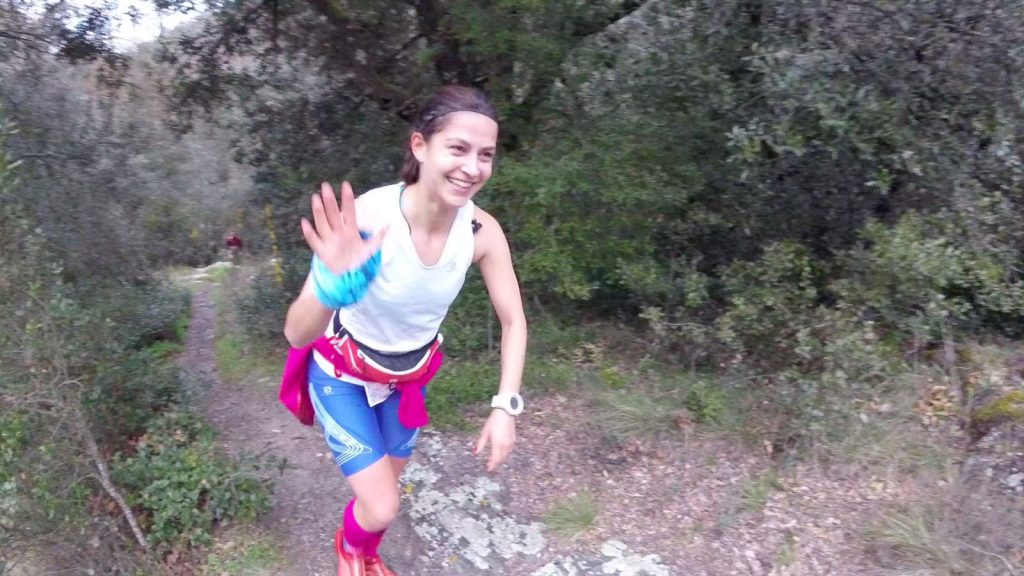 After the race, when I tried to take off my socks I felt the itch of some cramps, but just the itch.

The next day, my quads, my left plantar fascia and my right calf felt a bit sore. Ah, I also felt my upper arm muscles a bit tired, probably from all the pushing in the knees.
The water in the showers after the race was cold (what do you think Aiguafreda means?). Not a problem for me though.

First thing at 4.30 am I had some overnight oats with chia seeds and a cup of coffee.
Right before the race, on the way to Aiguafreda, I had a pre workout drink from Amway. Totally recommend it, as it has BCAA & creatine to boost the start of the race. It was my last pack, but I’m going to order more.
During the race I took with me two Raw Bite bars and two gels (Powergel caffeine free and MyProtein Pulse caffeine gel). I only took the gels, but the bars I brought back home, because I had enough food in the refreshment points.
There were 11 refreshment points in total where I had isotonic, water, bananas, oranges, some haribo type of candy and some biscuits. All sweet, unfortunately. They also had peanuts, walnuts and almonds, but those are too heavy for my stomach during effort so I didn’t touch any.
I had also pre filled my flask with an electrolite powder, from Amway as well.
It all went very well and I especially felt the caffeine hit from the MyProtein gel. I actually split it in two and had the first half at km 30 and the second half at km 36ish.
After the race I had a recovery shake and a butifarra sandwich, along with some chocolate, and then some real food.

The super comfy Salomon Intensity Short Pants
The ultralight Salomon Trailrunner Sleeveless Tee,
Salomon Sense Pro 2 shoes,
S Lab socks,
Salomon Medium Impact bra,
CEP calf compression (mostly to protect me from scratches and bruises)
Salomon Agile 500 belt set
And I had with me the Bonatti Jacket, but didn’t use it.
Overall, Vall del Congost Marathon was a beautiful race, an opportunity to enjoy running through an amazing natural park, and a great learning experience. I’d love to go back again, with a plan, and maybe be competitive. But until then, the season’s young.
Thanks to everyone who made it possible! I’m now even more confident and excited about the next months, not only running related, but I’m just grateful for what I have and what I’m working on.
Keep running!