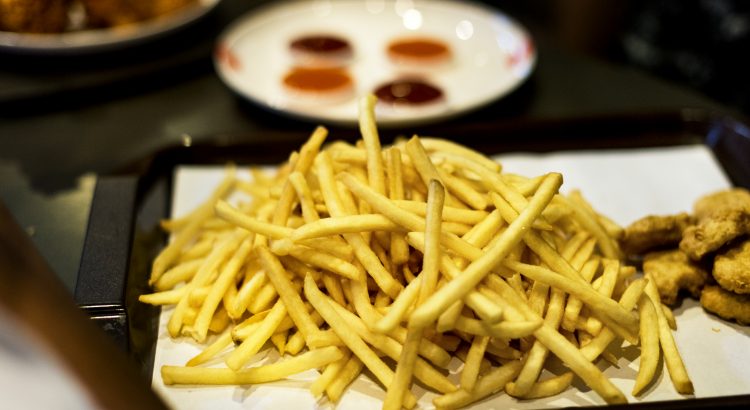 A bag of crunchy salty stuff – popcorn, roasted salty nuts, things that you just have to finish, no matter how big the bag is.

Trigger foods are those that you can’t stop eating. The ones above are my personal examples. Just some of them.

Our brain is wired to love and become addicted to the sweet – fat – salty combo. It’s not our fault, it’s evolutionary. But we can choose what we do about it.

Trigger foods can be healthy foods, because we all know that nut butters, honey, oats and other cereal, coconut oil and such fall into the group of most amazing stuff to have in the pantry. They really are healthy and have amazing benefits.

Others, even if are not that healthy, such as the occasional ice cream or brownie, can still be included in a regular diet and a healthy lifestyle. As long as they’re occasional and in a quantity that doesn’t mess up with what you’re trying to achieve. But that’s the problem with trigger foods: they’re hard to resist, easy to overeat and may end up adding some time to your progress.

All those benefits of the healthy trigger foods can actually work against us, those trying to lose or maintain weight, if we pass a certain limit, because they’re so calorie dense. By now we know that the dose makes the poison and that eating healthy does not equal eating for weight loss. Only calorie deficit does that, and with some of these foods it’s really difficult to limit ourselves to smaller portions.

Especially when they taste soooo delicious.

Of course, if your goal is just to eat healthier and have a diet richer in whole foods, then binging on guacamole is still waaaay better than binging on pizza. So take it step by step, according to where you’re at right now.

So what can we do about trigger foods?

Stopping after one teaspoon of peanut butter is ridiculous for me. That’s why I just don’t keep it around the house anymore. I have to accept that for the moment this is the situation: I either have too much of it or none of it. And for the moment, I prefer to have none. I still enjoy it as a dressing on foods that I have when I’m eating out, I have it when I visit friends and they make PB&banana pancakes or smoothies, but I don’t buy it and keep it in the house myself anymore.

The last time I ordered one, I gave half of it to a friend as a gift and still ended up finishing my half sooner than I should have.

So if you know there are some foods you just can’t stop eating, just stop buying them. Enjoy them in moderation when you go out. No restaurant or fast food in this world will serve you an entire bucket of ice cream, so two scoops of fine Italian gelato will have to do from time to time.

But what if it fits your macros?

Even if you have your calories under control, it’s better to make your meals balanced, with less hyperpalatable foods.

If by including some of these hyperpalatable foods in your menu you still reach your macros and calories for the day,  then one or several of the following will happen:

1 – you’ll still be hungry. A few spoons of peanut butter have your entire calories for the day, but they won’t help your hunger.
2 – you get used to it. The more you eat them, the more frequent you’ll crave them.
3 – you might end up binging. That’s what happens when you impose a restriction for a trigger food. When you really really love french fries, having just two chips today might mean ordering three portions tomorrow.
4 – you’ll be under an extra stress just by thinking about that food being in your fridge, so lonely and sad without you: “is it time to have it yet?”, “will I be able to stop after having just a little?” etc. And with all the stress that we have in our lives, the effort it takes to eat healthy and get some exercise, adding an extra source of stress is unnecessary.

If you do include foods that are more calorie dense and give you less satiety in your diet, especially if you’re during a calorie deficit or maintenance period, you’ll have to do that very carefully and you’ll probably have to track calories.

So, my point is: don’t let food control you. And if you do feel that right now you can’t say no to overeating some things, better keep them away for the moment.