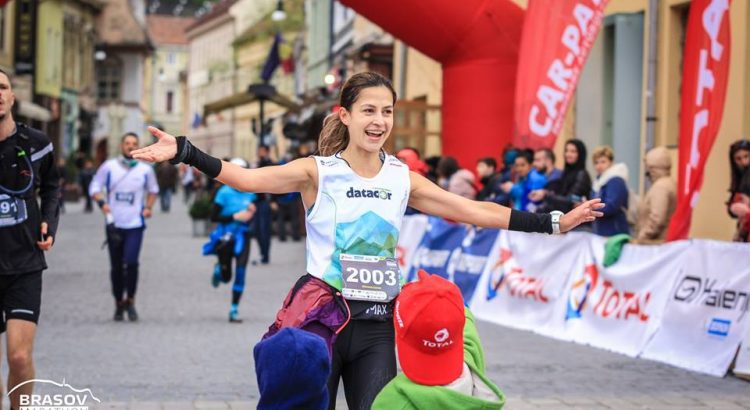 As a kid, I used to play the violin. It meant hours of practice almost every afternoon, when everything I played made my family and our neighbours cringe.

I could tell by their fake smile when we met in front of the building. They’d ask me “so how is the violin practice going?” as if they didn’t already know it was going terrible.

But every once in a while, the noises I usually made would sound like real music. Call it flow or practice making perfect, but some days the chords just “aligned” to play as they should.

I had the same feeling about running Brasov Marathon last Saturday. A race that I hadn’t been to before on a route that was kind of familiar to me because I had trained on parts of it, but never entirely and definitely never feeling in such a good flow as I did on the race day.

The marathon race is 38k long with 2200m elevation and I used to say it’s not the type of profile I consider to be my specialty because most of the elevation is gained in some relatively short but vertical climbs. However, it went better than expected and I learned not to be so radical about my expectations from now on.

I took this race both as a challenge, a test for my upcoming 50k race in Transylvania 100k, as well as an opportunity to be part of this running event in the city I just moved in to a few months ago. What better way to celebrate 6 months of living and running around the trails in Brasov if not taking part in its trail marathon?

I was a bit nervous about a few things before the race, such as the rain and snow that had made the trails quite slippery and also about running with a pair of brand new shoes.

Besides, it was my first race this year and I had that kind of anxiousness that I’d missed.

On the morning of the race, everything looked good: I had managed to squeeze all my gear into the belt, checked the aid stations list again to see where we’d find water, and the weather seemed chilly but perfect for running.

Andrei tied my shoes with his indestructible knot and we went out to Piata Sfatului, where the race starts, a few hundred meters from where we live.

A song of ice and hail

About 5 minutes into the race, as we were climbing to Tampa hill, a light hail started. I thought “perfect. 4-5 hours of this and I’ll get to see how water resistant my jacket really is“.

I started the first climb in a pace I considered to be semi relaxed, not too fast, but looking at my race on Strava afterwards, I noticed that I had PR-ed on that segment. Anyway, I was feeling ok, trying to warm up.

The first small descent we had was on a route I went training on several times and I really knew what to expect, but I also didn’t want to put too much pressure on my legs so I didn’t force it.

A funny thing that happened next was that Crina (a strong runner that I was meeting and competing with for the first time) and I were running literally side by side for a few hundred meters. I’m not used to that and I didn’t know if it was a strategy to disrupt my rhythm, but I overpassed her eventually, thinking it wasn’t the best idea. I’m not happy with being the first on the first half of a long race.

Eventually she caught up with me and we reached Postavaru Peak almost at the same time.

The climb to Postavaru was beautiful. Tough but beautiful: the snow was refreshing, the sun was shining, there were lots of people cheering for us and the first guys were already coming back from the peak. As we met, we cheered for one another and wished the best, although I also got a warning that I was going a bit too fast.

As I reached the peak I paused a little, said hi to the volunteers, and actually touched a pole on the peak just to mark my official arrival at the checkpoint. I wasted a few seconds or minutes this way, lost the lead, and I had to push on the slope descent, knowing it’s not my strongest point.

The descent really made my legs feel heavy and I knew that it was followed by another very steep and killer climb. What I didn’t know was how it felt to do that climb after going up to Postavaru and then running back down the slope carrying some heavy burning quads.

I’ll tell you how it felt. IT KILLED ME.

I remember starting the climb and thinking that I’d felt so good up to that point, and now I was miserable, my legs weren’t listening to any commands anymore.

I had the sensation that I was climbing really slow and I actually gave up on any hope for the first place. It wasn’t too hard to do that, since I wasn’t even planning or hoping to win this race. But what was harder was realising we were only half way through the race. And I had no idea what to expect from my body on the next half.

As this climb also finished and we started the descent again, I lost sight of any other runner. I was running alone on soft trails with wet tree roots, that smelled like spring grass and pine needles. It felt amazing. I let my legs go just having fun on some rocky parts that were a bit technical and couldn’t believe how well I was going.

I was actually enjoying it, thinking that I’m finally improving my downhill skills. I got to relax a bit, both physically and mentally, and gained a bit of confidence in my running in general.

But I also think the descent on the Crucur hill is where I gained a few precious minutes.

With 10-11k before the finish line I moved to the first position again. Caffeine gel, a deep breath, and I decided to go all in from then on. What followed was mostly downhill and runnable uphill, except for a famous steep climb that seemed never ending this time. I didn’t know what to expect from the other runners behind, I never looked back, I just climbed it as well as I could with my already very tired legs.

The last few kilometers were also the ones I’m most familiar with because it’s one of the routes that I train on. So I think it helped me push hard towards the finish line, doing a kind of slalom through the half marathon and cross runners who were also sharing that segment. I was going quite fast, asking them to please make way. I must have been a funny or scary sight 🙂 Many of them cheered for me and called my name, and I’m sorry I couldn’t reply or just say hi to everyone.

I crossed the finish line in 4h 21min, winning the women’s race and still not believing it actually happened.

They checked my compulsory gear at the finish line even before giving me a medal 😀 I’d been nervous all race long thinking that my survival blanket would fall out but luckily it was still there.

One interesting thing that happens in some races is going into that fight mode. A kind of “war’s on, game’s on” state, when you just “attack” and it gives you enough adrenaline to push hard. It can happen before the race, but it can also happen (or can be triggered) during the race. It can be a friend as it makes you push, but also a foe as it’s very very energy consuming.

I was hoping to be able to trigger the fight mode, but I really didn’t have it in me at Brasov Marathon. I just played the game and maybe it was even better this way, because I had some energy left at the finish line.

(Funny detail: I actually experienced my first fight mode in Brasov Marathon half marathon race three years ago. I was just in the beginning of my trail running competitions and, on the stairs that are part of the half marathon route I was overpassed by another runner. It was the first time in my life when I thought: “I will catch you, I promise”. Not the most productive or energy efficient attitude, but I didn’t know better at the time.)

Looking back, I can see how some things went very well, both things I can control and others that I can’t. They all fell into place leading to this victory and to a bit more confidence for me for the rest of the season. What’s even better is that I actually loved racing.

I’m happy that I enjoyed the race so much, even the parts that I didn’t enjoy 🙂 The pain and suffering. I got to see my legs going better than I thought, I got to see how I react when I’m being competitive, when I’m mentally down, when I’m just having fun on the trails, when I’m being overpassed or when I’m overpassing, as well as when I’m finishing strong.

Let’s say that this race taught me a few key things that will help me in the future.

The details behind a good day

I stopped at every refreshment point for water and food (and to make sure I’ll be in the photos :P) except for the first one, at km 4.

I had a Paleo bar from GoldNutrition about 50 minutes into the race, and then I had some homemade chocolate and glucose from the refreshment points. I will find that chocolate again and have it for breakfast, lunch and dinner, I swear it was sooo good.

I also had three gels (well, two and a little, because the second one didn’t want to go down), including a caffeine one on the last 10k.

The shoes I ran with were a brand new pair of Saucony Peregrine 8 that I had received on Thursday afternoon and taken on a 7k easy run for a test. The perfect recipe for a noob mistake. But it was a good choice, because nothing bothered me, I still have my toenails and they behaved exceptionally on the trails.

I want to thank the CPNT organising team and volunteers for cleaning the route that just a few days before the race was full of fallen trees. Also, for organising a wheelchair race, a massage area, and taking care of all the small details to make sure we’ll have a fun event.

Many thanks to Datacor Running team for their awesome support, to Denisa Dragomir for holding me accountable on the speed trainings, to GoldNutrition for the fuel, and to my friends from Brasov who trained with me this winter. And most of all, to Andrei for being there for me in all ways possible.

Overall it was a perfect weekend, with good results for both of us, friends and family around and a good feeling about this year’s upcoming mountain adventures.

How was your race at Brasov Marathon? Did you enjoy it? Maybe we meet again here next year.