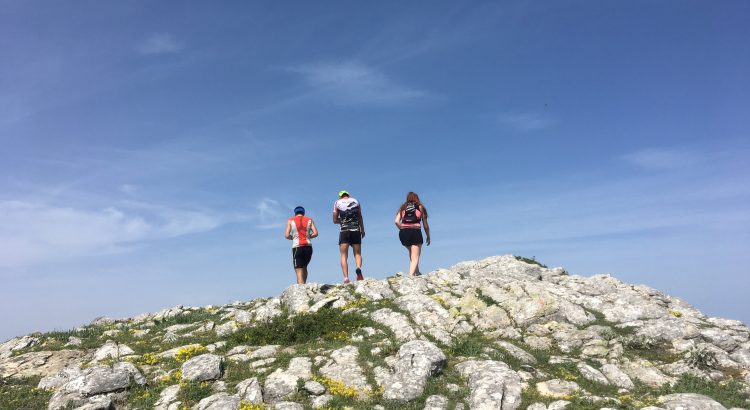 When your friends set up a holiday plan for Thassos, a pictoresque island with blue waters in Greece, you know it’s going to be a beautiful and relaxing vacation.

But if your friends are runners, cyclists and climbers, then you should know they’re tricking your ass into a training camp, and not a vacation.

As you might have guessed, my case was the latter.

Joke aside, the week spent in Thassos was beautiful for all the reasons above, and then some. We did hikes that ended after dark, getting lost and full of scratches in the bushes, we did long runs, climbed the highest peak and circled the island cycling.

All this powered by all the feta and olives we could eat.

Besides, it was full of people we knew. We’d walk around town in the evenings and meet other runners and cyclists, as if it were “Thassos, Romanian land”. Most of them were there for two cycling competitions – mountain bike and road bike – and had brought friends and family, to call it a holiday.

So if you ever consider going to Thassos and not spending all day on the beach, here are some tips about what you can do and how you can plan your sportsy holiday.

Choosing where to stay

We chose to stay in Kinira. By “we” I actually mean Andrei. He did some research and decided that this village was the best option for all the means of torture. I mean all the best trails, routes, and also beaches.

What he didn’t know was that it’s also where Agorastos, the best restaurant we’ve ever tried in Greece, is. With the most magnificent view.

Plus, Kinira is quieter than Potos or other towns. If you’re looking for nightlife you can drive to a bigger town. But if not, you can choose a hotel with a terrace and spend the evenings over a drink with your friends.

Two of the best ways to climb Ipsarion are starting from Potamia or from Theologos.

They’re about the same length and elevation, 6-7km with a bit over 1000m climb, but I’ve heard that the climb from Theologos has better views.

Make sure you carry water. On the climb from Potamia there are some springs at the beginning of the route, but as you get farther from the village, there won’t be any water sources.

From Potamia – Ipsarion, we didn’t want to take the same route back so we made a loop going to Dimitrios Peak, close to Ipsarion, and going down from there. We eventually met the same path that we took climbing, but only in the end of the route.

Of course, if you want to do more distance you could even look up a route starting from the village you’re staying in. We could have done Kinira – Theologos – Ipsarion and return, but this would have added some kilometers and some hours that we preferred to spend at the beach.

FYI: the trails in Thassos, just like those in Crete, can be quite technical. They’re not the comfortable soft ground trails, but rather rocky, so pack your shoes accordingly.

Also, as you climb higher, make sure you can do the route safely, because you can get to parts that are more exposed or trickier for those who are scared of heights.

Remember: SPF and water are your best friends.

One of the most famous routes to do while in Thassos is the tour of the island. It’s a 90km road with about 1300m elevation. It’s a beautiful route to do because you actually get to see the entire shore, pass by all the beaches and through some nice small villages.

The route is actually the one of the road cycling competition that takes place every year in the beginning of May, that I told you about earlier.

Depending on your cycling skills and the pace you want to have, you could do the entire route or split it in two days. More experienced cyclists do it in 3-4 hours, while less seasoned ones like myself can finish it in 6 hours with a few short breaks.

If you want longer breaks, maybe visiting a beach or two on your way, or stopping for a greek salad by the sea, make sure you start early.

For cycling in Thassos, you can either bring your own bike or rent one from Velo Bike Rentals in Potos. I chose the in between option and borrowed one from a friend who had brought his.

But if you’re a beginner, you could ride on the easier trails that are closer to the villages.

There are trails starting from every spot on the island. We did Ipsarion running, but we also did a route on a trail closer to Kinira. The possibilities are endless.

Just search on wikiloc or maps.me and find a route that suits you. And try not to get lost, like we did.

What else can you do in Thassos?

Well, of course, swim. On Paradise beach you even have a small island about 1,5km from the shore to reach, if you feel up to it.

You can even go crazy and do your triathlon thing if you want to. It’s really the place for it.

The only thing that can impact the entire experience is the season. During high season it can get pretty crowded, not to mention very hot and humid while you run.

That’s why we chose early May and we were among the very few people staying in Kinira. Another great option is September, when the water is warmer.

Have you ever been to Thassos and did some nice routes on the bike or by foot? What else do you recommend there?