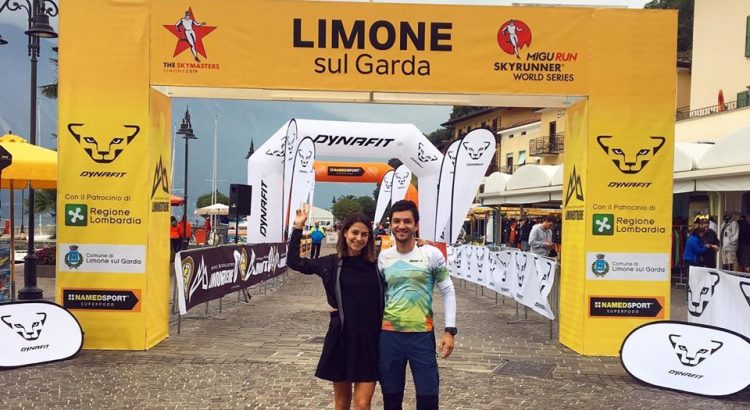 Limone Extreme Skyrace was the last race of the season, and it felt like the cherry on top – just as tough as the entire season altogether.

The race wasn’t exactly in the cards in the beginning of the year, when we made our calendars. But then our friends in Datacor Running Team started bringing it up and it didn’t take long to decide.

I mean, imagine it: the end of October in sunny Italy, running to the sky on beautiful singletrails. Sounds like a dream.

Except that it was rainy and you can’t really *actually* run on those climbs. But hey! It sounded as exciting as it could be.

The only thing I knew about Limone Extreme was how a Spanish runner once described it to me, nodding and smiling: “it like…oh, man!!”. Promising, right?

But then I did some research and I remember thinking that if Kilian finished 6th in this race, it must be some special kind of madness.

So Andrei and I both signed up for the Skyrace, which this year was a 21km route with 1960m elevation. Initially, it was supposed to be 23km with 2060m elevation, but the rain on race day made the organizers shorten it a bit.

We knew it would be a very competitive race, so we were joking that being in the top 30 finishers would be an awesome result. Both of us decided to give our best, whatever that means at the end of a long running season.

Looking at the race profile, I thought it was exactly the type of race that disadvantages me – a loooong vertical climb that I wouldn’t be able to run, followed by a long technical descent.

Plus, there were so many elites around. It’s true that most of them were in the Skymasters race, an even tougher cookie, racing for the big championship title.

So my only objective was to be safe, but also push a little bit, and enjoy the race.

At the start, we wished each other good luck and in 5 seconds I didn’t see Andrei anymore. Damn, that start was fast! The first 2km on flat, on the lakeside, were the segment where you have to get in front of the pack. I usually can’t start very fast and I was overpassed by some girls on that part, exactly before starting the climb.

This meant that the pack I ended up in was going a bit slower than my pace, and sometimes stopping completely at more technical parts of the climb. It might have been a better idea to push hard and end up in a pack where I’d be the weak link, and use the others’ pace to push myself.

However, I knew the race was just starting, I was just getting warmed up, and I had no idea what the rest of the route looked like.

It was cloudy and misty as we started. You could hear the feet rumbling on the lakeside asphalt, and some people cheering – bravi, bravi! But the rest was deep breathing, focus, excitement, and a sky that predicted a rainy day.

I barely got to see some views of Lake Garda from the first climb, and it looked as beautiful as I’d seen it in the pictures. As we climbed, the rain started – light, but steady.

It made the trails wet and muddy. And you can imagine what they looked like when I passed, after hundreds of runners from the Skymasters and Skyrace had been there before – mud slide.

Chilly, rainy, cloudy; I was absolutely loving the weather. I didn’t put my jacket on for a second. On the ridge, the wind was blowing from the left and then from the front, so strong that I couldn’t breathe in for a few seconds. I thought “run or freeze”.

At the end of the climb, it got so steep that I had to use my hands and grab the mud. I wiped it off my top, and also wiped my face with the same hands, which explains the state in which I arrived at the finish line, all covered in mud, from eyebrows to toes. A friend asked “what, did you run on your belly?” 🙂

When the descent started, it was pure joy and play. The play that I had missed at the previous race and some others. I just loved every step of it.
When I got to the finish line, Andrei told me he thought I’d hate the technical part of the descent. “When I saw what the descent is like I kept thinking you’re gonna kill me for getting you into this“, he said.

But the truth is that the first part of the descent wasn’t as technical as I thought. The big mud slowed me down a lot, because I was watching every step and I can’t afford any more ankle injuries. But at least I could move.

As the more technical part of the descent started, I was thankful that the rocks were not that slippery. I’m not good at this kind of terrain, but I was focused. And surprisingly, I liked this part, too, although it felt a bit long.

After a while I got to a checkpoint where the volunteers told me “from here, it’s only descent until the finish”. I don’t know why I keep believing them when they say that, even though every single time it’s a big effing lie.

Anyway, I kept running, enjoying, loving the weather, wondering who had won the Skymasters, whether Andrei was already at the finish line and so on. I even met two runners from Barcelona who recognized me from there and ran along for a while.

On the descent I overpassed one of the women who had been in front of me since the first climb. Then, on the last two kms, on an asphalt in easy descent that goes by the river and then by the lake towards the finish line, I overpassed another woman. I felt like I was flying effortlessly. And that’s the memory I’ll keep with me. Not because it describes Limone Extreme in particular, but because it’s the memory of a moment that reminded me why I love trail running.

I passed the finish line sprinting, grateful that I got to feel like a kid playing in the mud for a few hours.

After the race it took me about a half an hour to relax. I was super surprised by the awesome refreshment point at the finish line. It was like Italian fine dining, with all the possible goodies.

And as I was having some pasta, the awards ceremony started and Ingrid told me: “why don’t you check the results list? Maybe you should get prepared to get on the podium”. I said “no waaay…”, but I checked and, believe it or not, I was the 15th in women’s open and the 3rd place in my category.

I got over the fact that I got my ass kicked mostly by 20 year olds and 40 year olds, and I remembered what it’s like to go to a race without expectations, without counting positions, and then finding out that you ranked better than expected.

So that ended a day of work and fun. We spent the rest of it with our friends in Trento. And the next day was also surprising. I mean, surprisingly little pain. It’s clear that all the marathons and 50Ks take a bigger toll on the body that a shorter race as Limone does, even if it was a tough one.

I needed a race like this. And I am still surprised that it came at the end of the season, but it brought all the beautiful gifts it could bring, most notably that level of pleasure of running that can motivate a runner to train for the entire next season.

In total, we took a week off and spent a few days before the race and a few after, resting and also visiting the beautiful places around Trento, Lake Como, and Lake Garda.

It’s a beautiful area and a heaven for runner and cyclists, although some of the roads are quite busy. For example, riding around Lake Garda or Lake Como may sound like fun but for me, the roads were way to busy. But from what I heard, there are other options as well, not just the car jammed ones.

If you’re considering running in Limone Extreme and also having time to visit a bit, I think that you need at least a 4 day trip. One to rest, one to race, an two others to visit and do other stuff like climbing or cycling. If you need any tips or ideas, just drop me an e-mail or a message on my instagram or facebook page.

Big thanks to Datacor Running Team for all their support for this race and the entire season, to Infinity Run (where I got the super light and comfy Uglow shorts and the Hoka Torrents) and to GoldNutrition Romania for the fuel (even though it was chilly, I think I drank two liters of isotonic in this race).