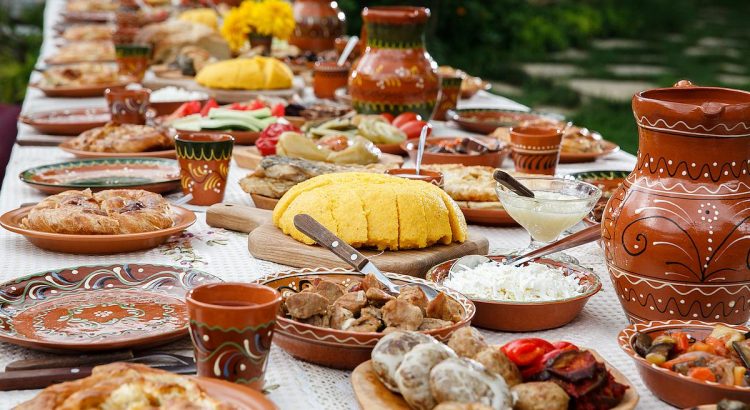 Growing up as a child of the Revolution born in the late 80s’ Romania, much of my eating habits have roots in my country’s very culture. And since us eastern europeans borrowed a lot from each other, in all senses, there are parts of the food culture that overlap and unwritten laws that are universal.

Meat me in the kitchen

First and foremost, there’s the meat. The presence of meat is the first law of cuisine in countries to the east.

Around there, if you tell your parents and grandparents that you’re a vegetarian or a vegan, you’ll only get them to worry.

First of all, you’ll have to explain what vegetarianism is. The easiest way to do this is to compare it to religious fasting in Orthodoxism. That will ring the perfect bell. Because in Orthodoxism there are a few bigger fasting periods a year and some days of the week (Wednesday and Friday) when religious people eat only vegan food. But in the rest of the time… well, the Bible didn’t mention anything about detox or juicing.

It will take them a few minutes to get over the fact that their son or daughter is keeping the religious fasts. They’ll congratulate themselves for bringing up such a God fearing child.

However, their next reaction will be “but why are you doing this all year long, every day? Is it because you can’t afford meat?! Is there something you want to talk about? DID YOU LOSE YOUR JOB?!!!????”

You can reassure them all you want that everything is perfect at the corporation, and that you’re actually taking a yoga retreat vacation in India soon. You can even show them your payslip. They’ll still look at you with a suspicious eye for the next few days, while packing all the pickles and other preserved foods they have in the house for you to take when you leave and feast on for the next century or so.

And that’s how we get to one of the biggest fears of Eastern European mothers: the fear that their child might be starving. They will do anything it takes to prevent that. Anything. Such as sending them huge packages of sarmale (meat rolls in cabbage or vine leaves), sausages and ciorba hundreds of kilometers away, to reach whatever city their child is studying in.

Yes, even the soup is carefully packaged in glass jars left over from last year’s pickles.

Because soup, borsh, and ciorba are the most common starters in the traditional Romanian cuisine.

And those, believe me, are some really amazing dishes. Not only are they the second best way to warm up during cold winters (after double distilled alcohol), but from a nutritionist perspective, they are complete meals. They have vegetables, most of them have meat with protein and healthy fats, some source of carbs like rice or noodles, and even some probiotics from the sour rye borsh.

However, there’s a big plot twist: it’s very common to see people stuffing an entire loaf of bread in the soup and eating it in a kind of semi solid state. And inviting you to do the same.

Because there’s so much you wouldn’t naturally do as a foreigner, but you end up doing anyway because you’re invited (or peer pressured) by the hosts.

Such as refusing the shot of palinca before a meal, that the man of the house will usually urge you to taste. His first argument? – “I made it myself”. Then, he’ll just down his own shot in a second, followed by the second argument – “It’s pure medicine”. You can’t say no to that, can you?

And the first rule of Eastern European Housewives Club is that you don’t refuse food. Never ever. Even if it means spending the rest of your life going to therapy and food coaching because you keep eating when you’re not hungry.

Finish the food on your plate

There are many ways to avoid eating if the chef of the house is not around, and kids master them, but if he or she is at home and you’re a guest, you’re doomed.

I actually miss the good ol’ days when we came back from school and we’d just “paint” some plates with traces of soup, feed the meatballs to the dog, and leave the dishes for the parents to find as evidence of our proper lunch.

But, like I said, you stand no chance if you’re a guest.

I promise you that if you refuse to eat, the hostess will just hide in the kitchen and not want anything to do with you for the rest of the day. Besides, years after this uninspired choice, you’ll hear the story of the rude guest who just said no to her signature homemade meatballs.

So you’d better have some.

No, not some. All of it. The second way to piss off an Eastern European hostess is to leave food in your plate. Yes, yes, it sounds so familiar, I know. What most people don’t know and can’t succeed in is killing this habit once they become adults and kilos start adding up.

There are some successful cases that I’ve seen leaving half of the perfectly delicious steak in the plate and half of the mashed potatoes. But offer them a hundred euro to call their mom 500km away to tell her what they just did, and they’ll refuse the money with a smile on their face. Their peace of mind is worth much more than you can pay.

But wait, there’s more. I hope you saved room for dessert and that the palinca, ciorba, and meat with a heavy side of carbs didn’t make you feel full yet. Because homemade Romanian desserts are perfect binge eating material.

They might not have the sophistication of a French eclair, but desserts are how a local hostess shows her love. And you can feel it in every bite of cozonac with tons of filling, apple pie covered with powdered sugar, biscuit salami (yes, there is such a thing) or soft plum dumplings that just melt on your lips.

Joke aside, I’m grateful that I grew up in a society where food waste was considered a sin, where people didn’t consume animal products from time to time, where McDonald’s was a luxury most families couldn’t afford, and as a consequence you wouldn’t see parents stuffing their toddlers with big macs in the metro.

Even more grateful to have been born in a city close to the Danube, which put the fish loving bug in my blood.

Our parents and grandparents didn’t get everything from a supermarket because there weren’t that many, and they were mostly empty. And when they did have some food on the shelves, people would have to wait in line for milk for hours, not knowing if there would be any left by the time it was their turn. You could call yourself lucky if you came back home with milk.

Imagine that up until 25-30 years ago, most food on the table came from the produce market, our own garden, or our neighbours’.

It was sweet and it was sour. Just like a soft homemade papanas covered in jam and heavy cream that makes you feel hugged by its warmth, but leaves you with an indigestion.